For Jill's newsletter I've chosen to reflect on a few sculptures I've made over a 20 year period in my career, starting with a work I d in my second and last year at the Technikon Natal  Art School - and enng with a 'new millennium' piece.    I must admit that I find it fficult writing about my own work.   Somuch goes into making a work of art that it is hard to know where to begin. As soon as I start thinking about a particular work, other pieces that share strong links with it come into focus, making it fficult to speak about the one while ignoring the others. And then there is always the broader context in which the works are made that needs to be taken into consideration. It will become obvious that most of the works selected were influenced by the  political fervour in at the time of making them.
Lectern
1983

In 1983, the big question for me, an aspiring artist was: How do I express myself amidst the raging political turmoil in ?   At the time I was seriously toying with the idea of relinquishing my 'White' identity in order to truly identify with the senfranchised majority of South Africans. This concept was expressed in several pieces that I made in 1983 and, to some extent, but in a more understated way, was the rationale for the Lectern.


Lectern has a white, dressed-marble top (probably a cornice from an old colonial-style builng). Beneath this top I cradled metal branches (broken-ness) that were held in place by a candelabra-like structure (quest for an ethical/spiritual underpinning of ideals). The ensemble's silent scream pleaded for a restoration of things - for the good of all - to take place.
Contemplation: Restoration,


Photo: Peter Greenwood.)
By 1985 the battle against apartheid had escalated exponentially. This piece was carved from a single block of wood which, at first glance, suggests a completeness of sorts but, on closer investigation, reveals something quite fferent.


The altar-like table is draped in a cloth that tries to mimic the ancient forest in which it once sang freely. The bowl on the altar can neither hold water nor supply nourishment for the trees that form it. As if to emphasize this state of enervation, a fish held in limbo by cleft sticks, is the concern of five strangely animated chairs powerless to do anything about the situation.
Birth,


Photo: Walter Hayn.)
I started working on this piece around the time that Nelson Mandela was released from prison, eventually completing the yellowwood original in 1994 when became a fully fledged democracy.

The fish-form of  Contemplation: Restoration is now at one with a tumescent, bowl-like womb: a fecunty from which much was to be expected.
Grace,
1996.
Metal and wood, painted.
Collection: .


Photo: Helgaard Steyn Catalogue.)
In Grace, the fish-form of Contemplation: Restoration and Birth has been transformed into a dynamic boat-like form. It is significant that this boat is made from a pile (note the metal pyramid-point). Piles are driven into unstable ground for builng purposes. The 'planting' of piles in a politically contested landscape can be seen as an act of sheer arrogance, especially when it is driven into the soil of senfranchised peoples.

In my sculpture, the pile - in its speeng boat-form, is an expression of the newly found freedom for all South Africans. Nestled in the boat-form is a smaller, seed-boat.
Owl,
1997.
Bronze etion of 11.


Only 3 years into our new-found democracy, the halcyon days of our rainbow-nation were fast fang. The nefarious goings-on during the dark days of Apartheid were being exposed on a daily basis as the Truth and Reconciliation Commission went about its mandate.
An introspective owl-man stands alone on a mound. Beneath the mound is a lateral tunnel with a septum in the middle, separating the one end from the other. The owl-man's feet straddle this hidden septum, perhaps suggesting that he is a product of both sides of .the invious  vide.   From behind, steps lead up to the top of the mound. The only logical way off would be for him to retrace his steps. The owl-man is incapable of flight! 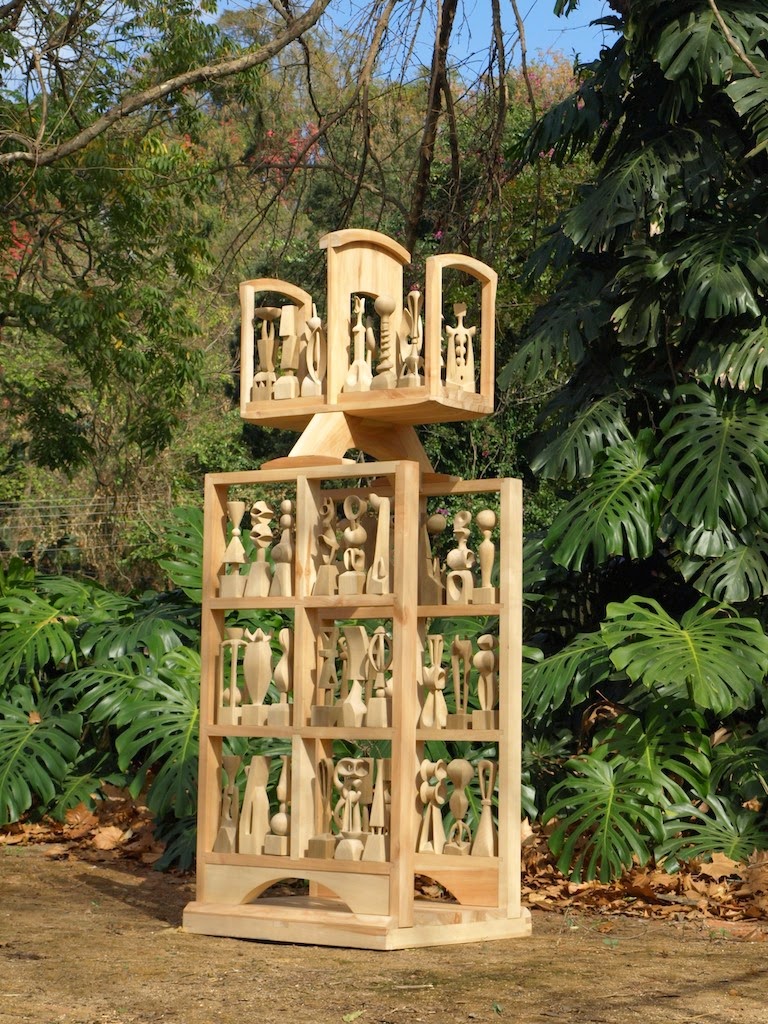 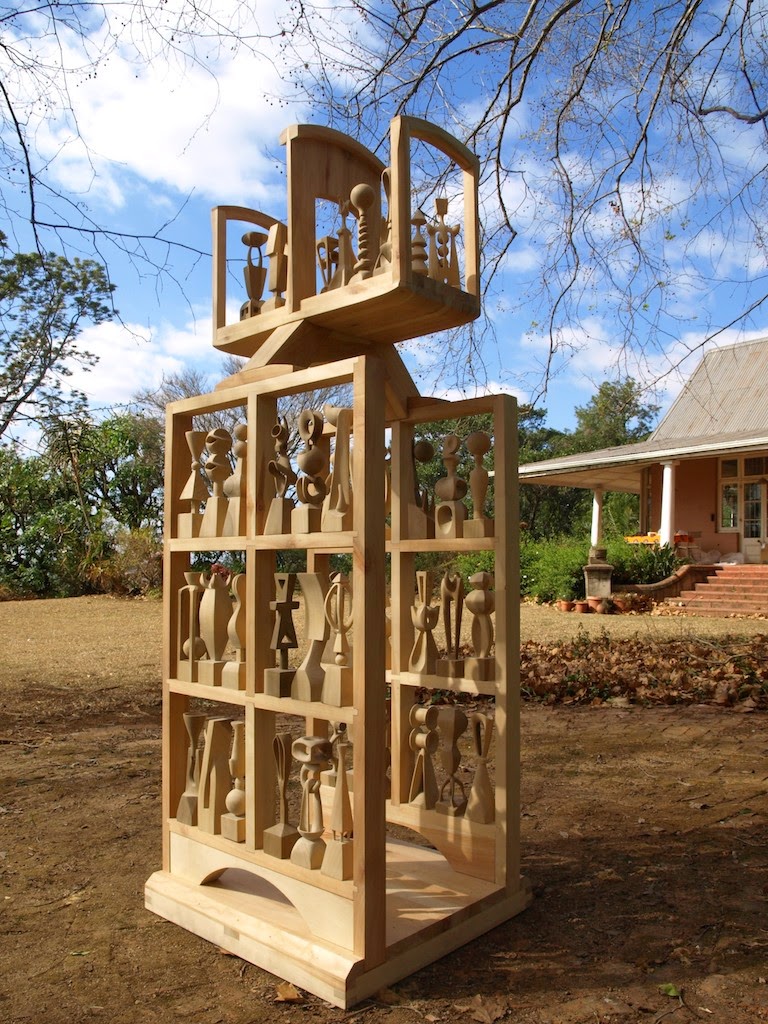 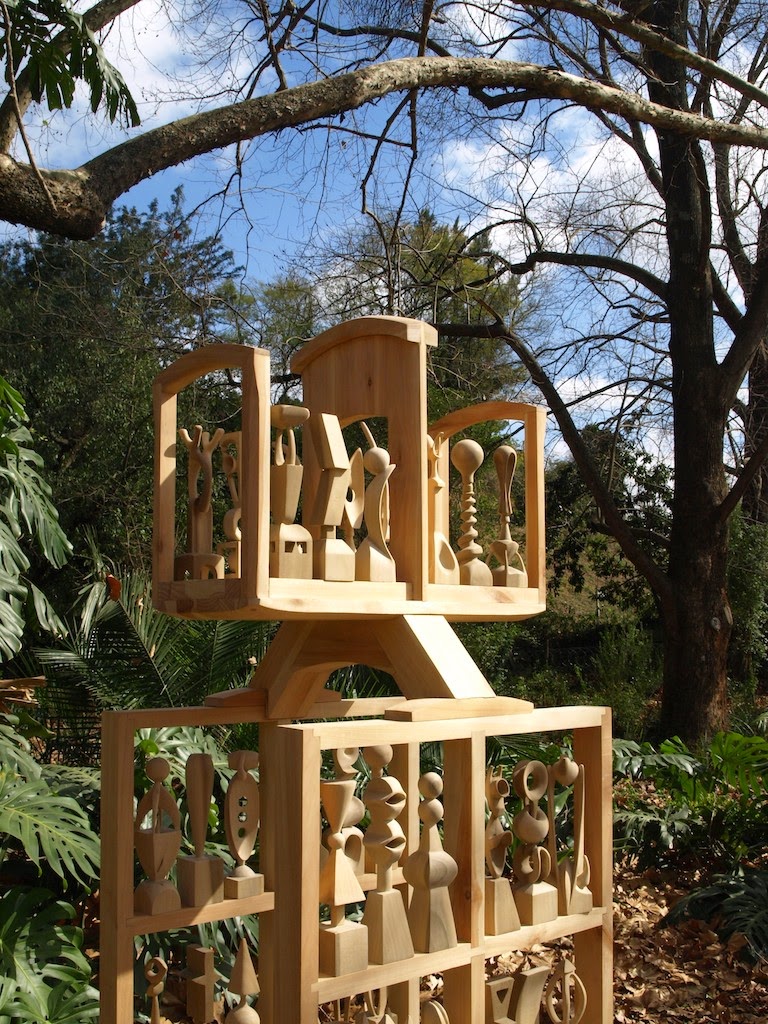 As I approached my 48th birthday I felt a deep weariness overcome me, I had lost my sense of
being,  I felt like an outsider! The opening lines from Dante's Inferno came into sharp focus: 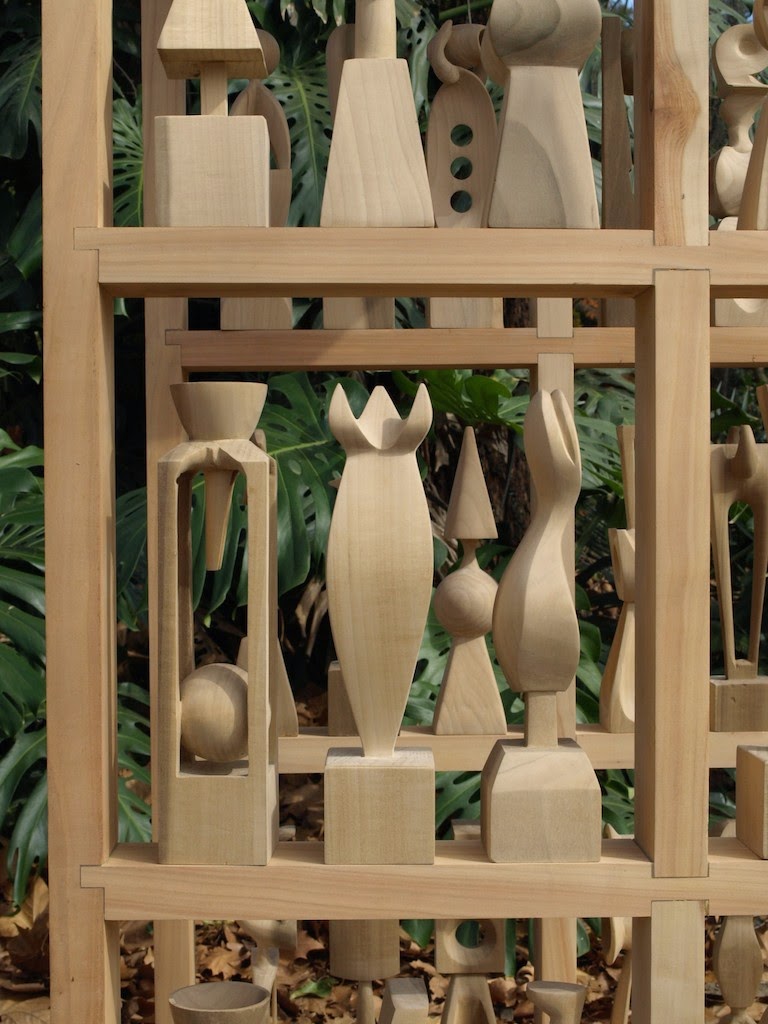 Midway on our life's journey, I found myself
In a dark woods, the right road lost. To tell


About those woods is hard -- so tangled and rough . . . "
As if to reassure myself I started carving 48 sculptures: one for each of the years that I had lived. They all had the same overall mensions but ffered in form. These I housed in a structure in which the pieces could be endlessly rearranged. With each permutation new synergies are formed, creating an inner dynamic that will rejuvenate the aesthetic of the piece.
The matriclan is like the forest; if you are outside it is dense,
if you are inside you see that each tree has its own position.

(A proverb from In My Father's House: Africa in the Philosophy of Culture  by Kwame Appiah, Oxford University Press, 1993.)The days of the Volk en Vaderland of the Apartheid era  (something  had in common with Nazi )   are now truly behind us!
Newer Post Older Post Home